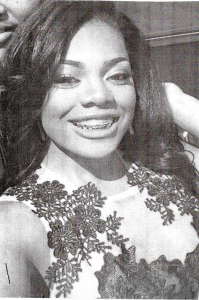 The Exchange Club of Dayton proudly celebrates our award winner for the Accepting the Challenge of Excellence. Angell has overcome significant obstacles for many years. Her life was chaotic as the family was displaced a number of times, and her mother resorted to imposing on various boy friends and other friends for temporary lodging. This often meant her “closet” was their car. When these crises occurred, her mother would sometimes take it out on the children verbally and sometimes physically. These incidents particularly distressed Angell as she often acted as surrogate mother for her siblings.

Initially, Dayton Early College Academy (DECA) was rough for Angell and her instructors, as she had a somewhat combative nature. She had recently learned that her father had died and although he had been mostly an absent father, there had been hope that she could develop a relationship with him. Fortunately, Angell received guidance and support in her new school and by her second year she decided that it was up to her to make the most of her life. At that point, she presented a positive smiling face to the world, in spite of set backs. Her junior year chemistry teacher noted that “Angell is an extremely driven individual who constantly strives for excellence.” Angell had the resourcefulness to recognize when she didn’t understand something, and she had the drive to find someone who could help her. She has gone beyond requirements of high school, maintaining a strong GPA while taking college classes at Sinclair Community College. In addition she has completed three 40+ hour internships, including one with the Women in Engineering Program through the University of Dayton.

Teachers and her counselor noted her strong leadership ability and her skill in balancing her academics, community service, and extracurricular activities. She has completed 117.5 hours of community service at House of Bread, Sugar Sweets by Peeks, and Adventure Central-After school Care, and most recently volunteered with Habitat for Humanity in Nicaragua. Her extracurricular activities included Captain of Varsity Cheer squad, Captain of a Jump Rope team, Praise Dance member, Law and Leadership, and the University of Dayton L.O.V.E Group.

Although there continued to be set backs, Angell sought ways to stabilize her life. Her senior year, her family again had to impose on a friend for temporary housing. Fortunately, the housing was with a friend who also worked at DECA. Angell asked this understanding friend if she could remain with her rather than move with her family. The friend agreed and benefitted as Angell helped her in some of her endeavors. With that new-found stability, Angell was able to earn a 3.09 grade average her senior year and collaborated in creating a 1 day event to celebrate Black History Month., despite learning that her father’s death was a self-inflicted heroin overdose. She had been earlier led to believe that is was a medical problem.

This young lady will contribute much for this and coming generations.