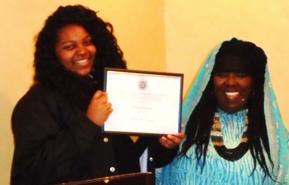 This young lady has overcome significant obstacles for many years, but they have inspired her to be a role model for her peers and her siblings.

In addition to difficulty with ADHD, she has had the additional distress of insecure resources as her single parent mother had to decide whether to buy food or pay for utilities.Some days local pantries were what provided sustenance. She attributes her achievements to her mother, as unfortunately her biological father only entered her life when it benefitted him and then he would be disparaging of her aspirations. The parents separated when she was 4. When she was 9, a strange man came up behind her at school, and only when he identified himself, did she recognize him as her father. She has had to deal with anger issues regarding her father.

One of the stand-out aspects of her character is that she recognizes that set backs can be paths for future development. For instance, she recognized that although she was frustrated with her lack of progress in a physical science class in her high school freshman year and failed the course, she needed to learn what her options were (in this case summer school) and, in the future, she needed to be a self-advocate in other classes to create a connection with teachers so they would help her. One issue early in high school was over-use of the phone, so she learned to discipline her use. Later in her schooling, she recognized that her poor weight management was adding to her health problems and limiting her aspirations to be a cheerleader. When there was a $400 fee to become a cheerleader, she managed to work two jobs to earn the money. Her father had promised to help, but despite his renigging, she managed to get the fee paid by her own efforts.

In addition to her current successes in school, as attested to by her teachers, Darien has proven to be an independent motivated learner, who is “not afraid to take risk[s], question theories, challenge the norm, nor afraid to shine.” Further, she helps support the family with two jobs, and not succumbing to the typical “join-me” adolescent fun, she takes her leisure time to participate in community volunteer efforts with her girl scout troop. She develops healthy friendships and is planning to room with a friend when she goes to Alabama A&M University.

She is resourceful as well, as evidenced by her ability to find transportation to the club presentation. (A ride was offered.) Initially a mother, then a grandmother, then an aunt, but finally she called to ask if her cousin could bring her. It was obvious the shared pride her cousin and her children had for their cousin Darien at the celebration.